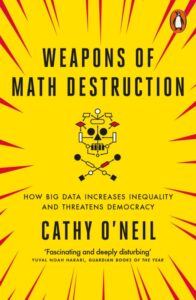 “Nowadays, it is more difficult for white middle-class people to get to Oxbridge”

This is a sentence a mother of my sister’s peer said during a school meeting a couple of months ago. She then looked at me – and I am definitely not white – and added: “No offence”, with her hand extended as to forbid me from rebutting. Then she laughed.

I thought of her while reading Cathy O’Neil’s Weapons of Math Destruction because the book made me realise that in about a year I will be sending off my university applications, and my data will most likely be fed into computers. And, what if algorithms selecting the most promising future students are being designed by people like her: straightforward racists invested in maintaining white privilege in higher education?

Throughout the book, O’Neil has shown how models and algorithms have been constructed from a number of incorporated statistics that would assign a score to a product used for measuring the efficiency of a person. Algorithms are being constructed with data carefully chosen to maximise cost efficiency while making it all seem scientific, and therefore neutral. Effectively, ill-conceived algorithms are strengthening injustice, inequality and prejudice across law enforcement, education, labour, banking and housing.

Universities are ranked yearly by algorithms that measure educational excellence and unsurprisingly most famous ones, such as Harvard, Princeton or Yale come on top, reflecting a hierarchy which carries the name of the universities and their status. O’Neil leads us to a crucial question to consider – “What is the objective of the modeler?”

In these conditions, universities are incentivised to get a superb score on the US mainstream media’s rankings.

Yet, these rankings leave out one important variable of the formula: tuition fees. In effect, even assuming that these rankings do indeed measure academic value of studying at different universities, they do not offer much insight on the effectiveness of money spent on different educational choices – they quite simply state that, for more money you can buy much better education.

Furthermore, by leaving tuition fees out of the model, university rankings have led these fees to skyrocket.

Between 1985 and 2013 cost of higher education rose by more than 500%, nearly four times the rate of inflation.

In my opinion, O’Neil can explain the self-reinforcing world of mathematical destruction, with concrete reasoning on why algorithms are controlling every aspect of our lives – from Netflix activities to applying for mortgages. For me, a beginner in the overlap between mathematics and adult life, this book gives a great insight of the unfairness and logistics in advancements over time.

It is also easily understandable for a person who is not a fan of maths, but I, being a massive math maniac, craved there would be more of an actual mathematical understanding of how Weapons of Math Destruction actually work. Because of that, I have deducted 0.5269 points, to 4.4731, which when rounded down is a rating of four out of five stars. 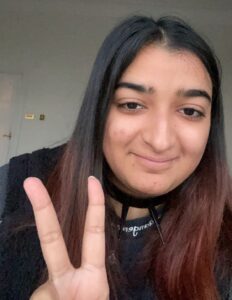