What ‘is’ dark energy and matter, the 95 percent of the Universe we know nothing about? 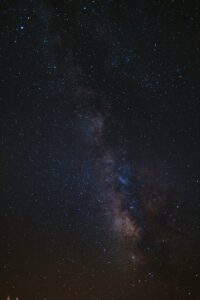 In 1929, when Edwin Hubble proved that the universe is expanding, an important question arose: so what will the Apocalypse look like then?

The first option was that the universe would eventually stop its expansion and recollapse, due to the excessive amount of energy density. The other – that expansion will never stop, therefore the end would be dissolvement into near-nothingness.

Until the 1990s there was a widespread consensus based on Albert Einstein’s theory of gravity, which assumed that gravity is the ultimate force, slowing us down and that it will eventually first prevent motion and subsequently retract the expansion of the universe.

However in 1998, when the Hubble Space Telescope allowed scientists to observe objects far away, studies of distant supernovae proved something completely different: the speed at which the universe expands is currently greater than it was in the past.

This data not only contradicted the theory about gravity slowing down the expansion of the universe, but also presented an additional unknown: a factor which influenced the universe so its expansion rate suddenly increased about 8 billion years ago.

Scientists had no idea how to explain the data, they only know that they missed something of huge importance. This mystery remains largely unsolved, yet physicists attempt at finding the answer.

It only makes sense for some life to exist somewhere out there. A recent research paper has shifted the spotlight to our sister planet, Venus.

There are two basic lines of reasoning. The first hypothesis focuses on amending Einstein’s theory of gravity by attempting to incorporate the ‘cosmological constant’ from another of Einstein’s gravity-related theories. This would be explained as an energy of anti-gravitational properties, filling the space and pushing objects from one another, increasing expansion. The other option assumes that there is an error in Einstein’s theory of gravity and involves attempts at providing a new theory thereof, which would explain the enormous acceleration.

Physicists believe that the change of rate in the expansion of the universe is due to a mysterious force which they describe as the ‘dark energy’. The notion of ‘dark energy’, however, is not a description of a physical phenomenon but a designation of a theoretical problem.

It was possible to calculate also that 68.3 percent of the universe is dark energy while 26.8 percent is dark matter – something that logically has to exist, because there is not enough visible matter to cover exactly that amount of what we know must be matter.

Still, humanity has no means of accessing or seeing dark energy and matter.

In fact, we know more about what dark matter is not than what it actually is. We definitely know it’s dark: we cannot see it. It does not project or reflect light. For what we know, it is not of the same form as star phenomena that is observable.

We also know that dark matter is not ‘black clouds’ made of particles called baryons – we are able to detect these clouds thanks to the fact they can absorb radiation.

We are sure that dark matter is not antimatter because antimatter wipes out matter when in contact, a process which produces gamma rays; scientists working on that problem had not detected a considerable amount of gamma rays.

Finally, a phenomenon called gravitational lenses allowed scientists to rule out the possibility that dark matter is a huge black hole.

Up to this moment, a couple of theories arose to shine light on the mystery of dark matter. The most viable one assumes that dark matter consists of yet unknown particles.

For over twenty years, scientists have been trying to solve this intricacy and it does not seem like they are any closer to the answer. There is still a lot to discover in this ‘dark’ field. What we are now privileged to witness, is only the opening chapter of the next great discovery in the history of Physics.