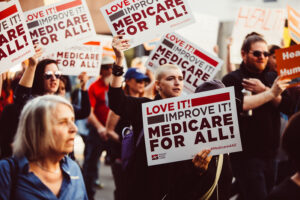 February 2017. Medicare for All rally in Los Angeles, United States.

Medicare for All: a debate

Last year, I participated in a national online debate on the merits of implementing Medicare for All in the United States. I decided to write an article introducing the debate to those of my generation. Rather than reveal my own position, I have elected to lay out the strongest points from both sides, to allow readers to come to their own conclusions. Seeing close to a million citizens die due to the COVID-19 pandemic, along with an economic crash and rising unemployment, just highlights the importance of the Medicare for All debate. Could this program transform our healthcare system for the better – or would it further harm our economy?

The essay that follows lays out the state of the debate, drawing on the divergent opinions of experts on various sides. It sets forth the economic implications of Medicare for All before exploring the potential impacts of Medicare for All on citizens’ medical access and health outcomes.

As a high school student who lives in both Hong Kong and the United States, I see differences between healthcare systems in my two homelands, with each system having its benefits and liabilities. Being part of the younger generation, I share my peers’ concern over the problems of healthcare — one day, caring for our elders’ well-being will become our responsibility. 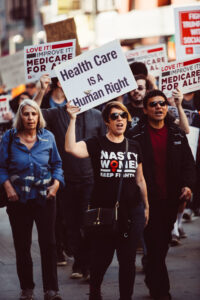 February 2017. Medicare for All Rally in Los Angeles, United States.

CON:  One of the main arguments against Medicare for All is the negative economic impact it could have. According to a health-focused media outlet Kaiser Health News (KHN), “economists estimate Medicare for All would cost somewhere between $30 trillion and $40 trillion over 10 years.” Additionally, Medicare for All would not solely be funded by the government; every citizen would have to contribute from their own pockets, and taxes from other areas would also increase.

Additionally, Medicare for All would not solely be funded by the government; every citizen would have to contribute from their own pockets, and taxes from other areas would also increase. In a long-read outlying the implications of the Medicare for All programme, Healthline, an American outlet focused on health-related issues, stated: “With Medicare for All proposals, some portion of the money you’re now paying toward health insurance would be shifted to taxes.”

If Medicare for All becomes law, hospitals could stand to lose a major portion of their current income. The New York Times cites calculations done by Dr. Kevin Schulman, a professor of medicine at Stanford University, according to which “Hospitals could lose as much as $151 billion in annual revenues, a 16 percent decline, under Medicare for all.” Were that prediction to be fulfilled, not only would hospitals encounter economic backlash, but many health insurance agencies could face bankruptcy as well.

Katie Keith, a research faculty member for Georgetown University’s Center on Health Insurance Reforms – quoted by Healthline – stated that the current Sanders Medicare for All bill “would prohibit employers and insurance companies from offering insurance that covers the same benefits that would be provided under the Medicare for All program,” directly affecting companies’ ability to conduct business in the sector.

PRO: Unsurprisingly, not all pundits, politicians, and economists agree on the potential costs of Medicare for All. According to KHN, “researchers calculate $78.2 billion in savings from providing primary care to people uninsured, and they also suggest hospitals would spend less money on overheads, having to instead only navigate a single insurance plan. That change accounts for $219 billion in their estimated savings.”

Moreover, even a right-wing think-tank Mercatus Center in its study writes: “The US could insure 30 million more Americans and virtually eliminate out-of-pocket health care expenses while saving $2 trillion in the process.” The money saved could be used to greatly expand primary care in this country and make certain that all Americans get the health care they need when they need it — saving billions on expensive emergency room care and hospital visits. Instead of paying the current highest price in the world for prescription drugs, under this legislation, we could save hundreds of billions over a 10 year period through tough negotiations with the drug companies. Most importantly, we are saving the American people from poverty.

According to the American news channel CNBC, “an estimated 530,000 families turn to bankruptcy each year because of medical issues and bills.” Additionally, online financial advice outlet The Balance states that “62.1% of bankruptcies were caused by medical issues and over 2 million people are adversely affected by their medical expenses.”

Medicare for All could potentially save millions of Americans from poverty and save trillions of dollars over a several-year period.

CON: Another major concern for opponents of Medicare for All is a projected decrease in access to medical care should the bill pass.

As mentioned in the above paragraph on economic implications, hospitals could experience a major drop in revenue, possibly losing as much as 151 billion dollars, a 16 percent decline. In this scenario, hospitals would not have the resources to pay for expensive medical equipment, doctors’ salaries, and drugs that are needed to sustain healthy lives. Therefore, the quality and accessibility of hospitals could drop significantly under Medicare for All.

Additionally, increased ER wait times due to understaffing could lead to negative health outcomes. According to a British progressive daily,

Finally, if Medicare for All fails, the general population could face a major health crisis. With many private hospitals, doctors, and pharmaceutical companies out of jobs or bankrupt, there would be fewer points of care in the healthcare system overall.

PRO: Even if these dire predictions prove correct, however, the problems we currently face are just as bad, if not worse. According to the U.S. Census Bureau, “in 2020, 8.6 percent of people, or 28 million, did not have health insurance at any point during the year.” Additionally, the weekly online newsletter,  Harvard Gazette states “nearly 45,000 annual deaths are associated with lack of health insurance.”

The Guardian notes that “millions of Americans – as many as 25% of the population – are delaying getting medical help because of skyrocketing costs.” Even Americans who have partial health insurance are being greatly impacted, for example, Erin Bradshaw, Chief of Mission Delivery at the Patient Advocate Foundation, expresses in a CNN online article that even if Americans have health insurance, “they still can’t afford to get the healthcare that they need.”

Moreover, while tens of thousands of Americans die each year because they cannot afford the health care they desperately need, health insurance agencies are generating billions of dollars in revenue.

According to CNN, “for UnitedHealth, the largest insurer in the US, net earnings have surged since 2015, reaching $17.7 billion last year as their business has rapidly expanded into other healthcare sectors.” To many, the idea that these insurance companies are thriving while its citizens are suffering from the expensive hospital bills is outrageous and unfair. For those who hold this view, the fact that the United States pays the most per capita for healthcare suggests that this should be reflected in both better healthcare and widened access.

As a global pandemic continues to rage, questions of healthcare access can mean the difference between life and death for impoverished families.

Meanwhile, the national government and insurance companies are grappling with questions about coverage: given the scale of the disease, should funds emphasize treatment or prophylaxis? The high school debate competition I participated in was low stakes, but there is no issue with higher stakes in reality.

The future depends on the younger generation; significant issues like the healthcare crisis will soon be up to us to solve. Healthcare is not just about the economy, but also most importantly about saving lives. The positions we adopt on this issue will help to shape our future society, ensuring that the elderly stay healthy as long as possible and that the youth are in fantastic condition.

Hopefully, the facts and figures included in this essay allow my readers to gain a sense of what is at stake. It is clear that strong decisions need to be taken to address the major healthcare problems that are occurring in the United States. 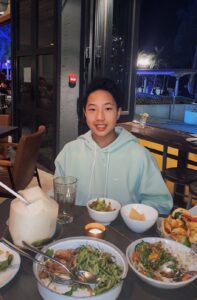