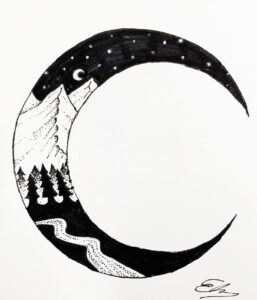 Mountain town inside of the Moon

We are three sisters: seventeen, fourteen, and seven.

For as long as I can remember, we each have a special seat in the convertible: me, in the passenger seat alongside my mom, Eleanor, the youngest, directly behind, and Mary next to Ellie. I rarely allow Mary to sit in the front; there is only one such evening that I recall doing so, and I never fail to regret that brief lapse in judgement, where an aspect of impending reality forced itself upon me.

Back against the tanned leather seat, I look out the window. We pass my former elementary school, and vague recollections of playing outside in the basketball court or sitting on the food-stained cafeteria tables under the shadow of tall, everlasting oak trees come and go in my head. Next comes the swimming pool where I nearly drowned, only to learn basic strokes a year later and progress into a competitive swimmer. The diving board that first appeared larger-than-life and far too big for my small, petite frame also dissolves into the background. As we continue driving home, the car picks up speed. One familiar landmark of the town I have lived in since birth fades into the next until they become a singular blur of semi-forgotten, faded memories.

No longer able to make out my surroundings, I turn my attention back into the car. My eyes close, and I feel the rush of wind coursing through my hair, tangling the recently brushed strands into a messy web that I will later have to sort out. The events from this evening — my lovely Caesar salad with chicken; shavings of parmesan cheese brushed to the side as much as possible — waver in my head until I hear the familiar tune of “Flying” from Peter Pan playing in the car. A recent favorite of Ellie and my obsession until age twelve, the chords bring me back to reality, and I glance sideways at the child ten years my junior.

Family friends always comment on the similarities in our appearance; how we could be identical twins if I had only been born ten years later or she ten years earlier. Golden-blonde locks frame her face, and long, black eyelashes mask the deep blue eyes underneath. Mine has since developed brown specks in the center, but hers are as pure as the night sky, as deep and vast as the ocean outside our home — they are infinite and beautiful. Pale skin against the darkness of the evening sky, her cheeks retain the puffy, child-like quality that seems to sink within my own as each year passes. Her fingers are fragile, only a quarter of the size of my own; when I clasp them in my hand, I imagine a bear cub, soft and ignorant of the dangers it faces.

The mother is there to protect and hide her cub from humans, sheltering her baby as long as possible. Each brief touch reminds me of the coarseness of my own hands, and how they were once like hers. We gave my old zebra-striped car seat away a few years ago; I no longer needed the extra protection. Ellie, however, still sits on a booster seat, legs dangling in the air as she cheerfully smiles and hums to the tune of the music. A halo of golden rays illuminates her silhouette against the twilight.

These thoughts briefly flow through my head, and as I turn away to once more look outside my window, I feel a single tear trickle down my face. Fast at first, only to slow down until it reaches my chin, dripping off onto my shirt and seeping into the fabric. There is a slight patch of wetness, a cold area that clings to my skin until we reach home, and I change into my pajamas, climb into bed, and go to sleep. Even when I wake up in the morning, the chill clings to me.

Submit a short story, no longer than 2,000 words, on the subject line:

That was the first time I encountered the thought of ageing. Physically I had changed over my teenage years but mentally I had clung to childhood and what it encompassed — freedom, youth, and joy — for as long as I could.

All children, except one, grow up. I always thought I would be the one to remain within the confines of innocence, escaping the inevitability of adulthood. Yet, on the brink of eighteen, I count the days separating me from the rest of my life. Every minute, every hour, of every day, falls out of my grasp, like precious sand that one can never recover. The beach is an expanse of this material, but the wind blows each handful elsewhere. Watching the loose powder float away, I run to catch up to it, but it slips out of my fingers every time.

There is a tragedy in this loss, the loss of time and adjustment to a new normal: adulthood. The nostalgia I feel for long days of lounging on the couch, staring at an empty space on the wall or watching television from morning until evening are overshadowed by grief. I once dreamed of being a Lost Boy who could fly away to Neverland with Peter Pan and never get older; I now know that this wish will never be fulfilled. 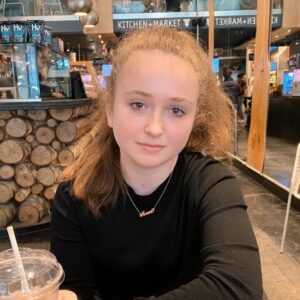 Born in 2003, Noemi Elliott divides her time between Singapore and the United States. Noemi holds American, British, and Hungarian citizenship and speaks English, Hungarian, and Mandarin. 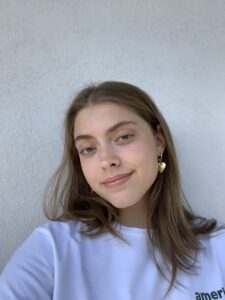