The Azerbaijani military position is located on the hill in front of our balcony within firing range, Khnatsakh village, Armenia. Photo was taken on August 18, 2022

Another Generation of War in Armenia. Living Everyday to the Fullest

I woke up from the excavation noise on April 30, 2021. My family members were panicking, looking from the window of our house. Uncertainty and trouble lay over my village. I was trying to keep calm until I realised what was going on, still, my heart hurt when I saw Azerbaijani Armed Forces digging into the sidehill in front of our house.

Their goal was unclear. Our village head went to negotiate with a general, but they couldn’t do anything. Azerbaijan had started digging a military position within firing range of my birthplace Khnatsakh. This village of 1000 residents is in the Syunik province of Armenia, an economically significant geopolitical region. It connects the capital Yerevan to the Iran Islamic Republic and borders Azerbaijan.

Born in 2004, in independent Armenia, more than a decade after the collapse of the Soviet Union, I wasn’t a witness to the first Nagorno Karabakh war – a bloody conflict that broke out in the late ’80s and continued till 1994.

Then ethnic Armenians living in Azerbaijan’s autonomous region of Nagorno-Karabakh, applied to Moscow to detach the enclave from Soviet Azerbaijan and attach it to Soviet Armenia. The latter became a reason for a full-scale war forced by Azerbaijan. That war took about 6000 lives of my father’s generation, ensuring that my generation could grow up in relative peace.

However, relative peace shattered on September 27, 2020, when Azerbaijan again launched a full-scale war over Nagorno Karabakh, a disputed mountainous region that ethnic Armenians have governed since the 1990s. Azerbaijan managed to take control of some districts in Nagorno Karabakh and change the political boundaries. Now, its military positions are a stone’s throw from mine and many other Armenian borderline villages.

Like in the 90s, this war also took thousands of lives. According to the official Armenian source, the total number of civilians and military personnel killed is 3822 people, many of them aged 18-25. This war took the lives of my peers.

Live in the moment

In my village, we can hear movements in the Azerbaijani military position. Such a close presence of the adversary army has negatively affected the mental state of the people, especially the younger generation. It has deepened the stress and mental instability the recent Nagorno Karabakh war brought.

“There is some fear that a new war can break as the situation in the borderline is continuously tense,” says Ani Margaryan, 19.

The recent and periodical violations of ceasefire by Azerbaijan and the war in Ukraine have increased the risk of a new war. Russia brokered the truce that ended the 2020 Nagorno Karabakh war. Now Moscow’s focus is on Ukraine.

“There is no trust in tomorrow. I’m afraid to make any long-term plans as I’m sure the future is not bright. Moreover, it can be lost if no steps are taken to save it. The confidence in safety and security has vanished”, says Edgar Avetyan, 19.

36% of Armenians believe there is a risk of a new war over Nagorno Karabakh, according to the 2021 published survey by Caucasus Research Resource Center. 18% think the new war will break within a year, and 13% within five years. At the same time, 24%, around a quarter of Armenians, think the war hasn’t ended yet.

“For some people, the never-ending feeling of uncertainty and the danger of a war became the reason for disappointments and migration,” says Mikayel Babayan, 19.

Psychologist Davit Gevorgyan mentions that before the war, in the COVID-19 era, people in Armenia were already mentally exhausted due to uncertainty the virus brought. The war multiplied the mental fatigue with its negative consequences, daily reports about human, territorial losses, and displaced people.

“War is a very stressful and traumatic situation that causes the same emotional state… Aggressive behaviour, certain fears, and anxiety have increased in the post-war period. The distrust in the future, the fear, and the expectation of war repetition has grown… People became intolerable to each other. They are hypersensitive and explosive”, said Gevorgyan in the public webinar supported by UNICEF. He is also the director of the Yerevan State University Center of Applied Psychology.

Different social initiatives in my region aim to help the youth to cope with mental distress.

“We have implemented many projects. We implemented an emergency support program for families already displaced during the war. There were psychological consequences; that’s why we had psychologists in the team who worked quickly and well. There was a child who lost his father, and they barely came out from under the bombings of the war. Those children needed that psychological support for a long time. We were helping them”, says Artashes Torozyan, the head of the local Partnership and Teaching NGO.

Another social-educational organisation called Children of Regions is trying to boost the skills of local young people in different fields, including education, business, and the military.

“The elders should give their experience to the younger ones, teach them that one cannot act alone, but must join the teams, strengthen the teams. Teams reduce the responsibility per person and increase the output. This is how you can do great things and stay united,” says Mayis Margaryan, the head of the initiative.

For 35-year-old Margaryan the central question remains how to live every day to the fullest.

“Only a fool will not conclude what happened. The question is always how to use every single day effectively”, he says.

A valley near Khnatsakh village. Photo was taken from the top of the hill on June 27,2022

I’m also trying to do my best. COVID-19 and the war has contributed to this stance. I don’t dare to leave anything for later. I want to do more to fully live out those hours of my life that I may not be able to experience the next moment.

The post-war collapse strengthened my decision to become a psychologist, hoping I could be helpful professionally. 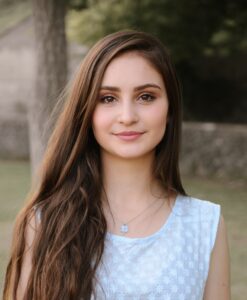 Born in 2004, in Khnatsakh, Syuzanna studies in Yerevan, Armenia. She is interested in psychology, art, marketing, photography, and sports. She plans to study Pediatric Psychology at Yerevan State University. For Harbingers’ Magazine, she writes about social issues with a focus on youth.