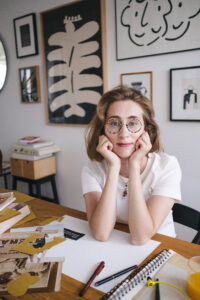 Ola Niepsuj is an illustrator and graphic designer. She combines collage, pencil, ink and paints with digital media, to create her often humorous and idiosyncratic images to design posters, visual identities and infographics.

Her illustrated comments have found their way into various magazines, books, textbooks and children’s publications, including New York Times, WSJ, Taschen, Thames and Hudson. She has worked with companies such as Nike, Converse, HBO, Showmax, Ikea, Apple, KFC, Melissa and Skanska.

Her work has been displayed in more than 170 exhibitions in 31 countries and she has been awarded many design-related grants and awards (including the American Illustration Annual and Society of Illustrators NYC).